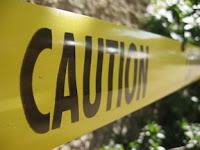 Today I read one of those passages that made me say "huh?". It's right after Jesus cast demons out of man..."Then people came out to see what had happened, and when they came to Jesus, they found the man from whom the demons had gone sitting at the feet of Jesus, clothed and in his right mind. Those who had seen it told them how the one who had been possessed by demons had been healed. Then all the people of the surrounding country asked Jesus to leave them." (Luke 8:35-37 NRSV)

Isn't that exactly opposite of what you'd expect? I'd think they would bring all their sick and needy to Jesus to have him do something for them. Instead, they ask Jesus to leave.

The Bible tells us that fear caused them to do this. Fear of the unknown, fear of change, fear of the supernatural? I think it was fear of what they couldn't explain. This event summoned them to throw away the "box", not just think outside of it.

At first, I shake my head at these people, but then God snaps me to reality. There are things He is calling me to believe, do and pursue that cause me to recoil and hesitate.

Experiencing Jesus is more dangerous to my comfort zones, security and "nice, neat & tidy" life than I realize at times.
Posted by Bart Coffey at 4:16 PM