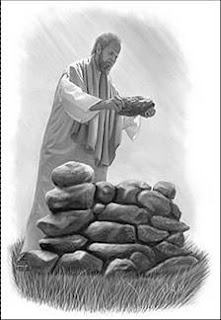 Abraham's journey was marked by altars.

Sadly, "altars" have been forgotten in our day...the place where we connect with God has been lost.

Genesis 12:7 says..."Abram built an altar there to the LORD, who had appeared to him."

After obeying God’s call and migrating to Canaan--a journey of approximately 1000 miles--God again appeared to Abraham. That revelation caused him to build an altar in RESPONSE to God.

"After that, Abram traveled southward and set up camp in the hill country between Bethel on the west and Ai on the east. There he built an altar and worshiped the LORD." (Genesis 12:8)

Here we see Abraham travelling farther and then building another altar to God in between Bethel ("house of God") and Ai ("ruins"). I believe he was declaring he had been brought out of ruins into the presence of God. Abraham’s second altar was to WORSHIP God for what He had done in his life.

Maybe you and I need to build an "altar" in our lives today?