Why We're All About the Numbers by Steven Furtick 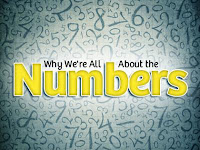 What else matters? What else should we be about?

This might come as a shock to a lot of people, but measuring numbers and putting an emphasis on them isn’t a new phenomenon. 2000 years ago, Luke by the inspiration of the Holy Spirit wrote: "Those who accepted his message were baptized, and about three thousand were added to their number that day ... And the Lord added to their number daily those who were being saved." (Acts 2:41, 47)

Apparently God is all about the numbers. So I want to be, too. And so should you.

It’s unacceptable to me as a pastor that we would stop growing when the Lord wants to add to our number daily those who are being saved. And in order for that to happen, we need to track every scrap of statistical data at our disposal. We’ve got to make sure we’re measuring ministry numbers to measure our effectiveness and enlarge the Kingdom of God. I don’t want to waste a single dollar or second on a program, piece of equipment, or ministry position that isn’t the best option for reaching the most people.

You might be averse to numbers for a number of reasons...

Maybe you don’t like the idea of big crowds. If that’s the case, you wouldn’t have liked the New Testament Church. And you really won’t like heaven.

Whatever your reason is, remember: every number is indicative of a story.

Personally, I don’t want to put a cap on the number of stories God wants to redeem.
Especially when I read this: "I looked and there before me was a great multitude that no one could count. And they cried out in a loud voice: 'Salvation belongs to our God.' (Revelation 7:9-10)

I don’t know about you, but I don’t want to wait until I die to see this. I want to see this partially fulfilled in my lifetime. More people worshipping Jesus than I can count. I want to see a little heaven on earth through our church...through every church. I think it’s what God wants too.

And that’s why we’re all about the numbers.

~~~~~~~~~~~~~~~
Excerpt from Outreach Magazine from 07.31.12
Steven Furtick is the founder and lead pastor of Elevation Church. In just under seven years, Elevation Church has grown to more than 10,000 people in weekly attendance, meeting at seven locations in the Charlotte, North Carolina area.