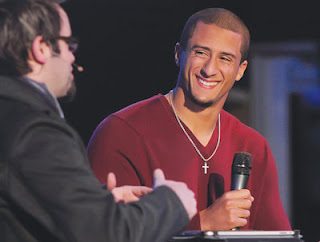 Excerpts from an interview with 49ers quarterback Colin Kaepernick in Sparks, Nevada at Summit Christian Church in February 2012.

“I know there were times in the season where you start looking at things, especially this being my first year and not playing. I’d ask God what his plans are for me,” Kaepernick said. “What is God trying to do with me right now? For me, there were times where I’d wonder if I was in the right place and in the right situation, and you have to fall back on God in situations like that and trust him and know that his plan is perfect for you. Wherever you’re at, whatever you’re doing, that’s what his plan is for you and you have to make the best of it and keep moving forward and keep striving and things will work out.”

“I don’t think most people look at football players as what they’re doing out here is trying to glorify the Lord,” Kaepernick said. “I think a lot of people think of it as oh it’s a game, let’s go win. Ultimately, that’s your goal, that’s what you want to do, but you also want to glorify the Lord on your way to doing that. “My faith is the basis from where my game comes from. I’ve been very blessed to have the talent to play the game that I do and be successful at it. I think God guides me through every day and helps me take the right steps and has helped me to get to where I’m at. When I step on the field, I always say a prayer, say I am thankful to be able to wake up that morning and go out there and try to glorify the Lord with what I do on the field. I think if you go out and try to do that, no matter what you do on the field, you can be happy about what you did.”

“It’s almost indescribable. Growing up, I was the kid that was running around looking at high school athletes in my area that were doing well and saying ‘Man, one day I’m going to be like that,’ and then I’d meet someone that was in college or the pros and think ‘Man, that’s my dream, that’s what I want to become,’ and to be a in a position where you can be a role model for kids like that and send a positive example, a positive message to them, I really want to take advantage of that opportunity and send the right message and be a good role model to those kids.”