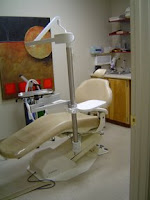 Today I had one of those moments where I knew that God was answering someone's prayer for me.

On Monday, I went to the endodontist to begin a root canal on a broken tooth. Unfortunately, after the maximum amount of shots, he couldn't numb me enough to work on the tooth without some very intense pain. He referred me to a colleague to give it another try.

Today, the second endodontist attempted the root canal. He gave me several shots and then said he too was at the maximum dosage with no success. He suggested we wait a few minutes and see if the area becomes numb. As he left the room, I began to pray and sensed others praying for me as well. Within moments, my tooth, lip and tongue became tremendously numb...not gradually, but instantaneously. I knew God was moving.

After that, it was a simple procedure.

Even though I'm in pain, I am thankful God answers prayer...
Especially when you're in a dentist's chair!
Posted by Bart Coffey at 2:00 PM