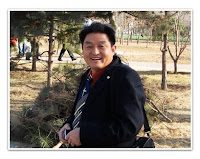 Great News...
The Chinese pastor we were praying for has been released!

On Friday, August 29, prominent Chinese house church leader Zhang Mingxuan, affectionately known as "Pastor Bike," his wife and a co-worker were released from Chinese custody. Pastor Bike was arrested along with his wife and co-worker August 6, two days before the Olympic Games began in Beijing. An outspoken evangelist, Pastor Bike has traveled on his bike to many places in China, handing out Christian literature and Bibles and preaching the gospel of Jesus Christ.

Instead of being held at a prison or a detention center Pastor Bike and his wife, Xie Fenglan, and their co-worker were taken on a "forced vacation" designed to ensure that they couldn’t talk to any foreign media. Pastor Bike was scheduled to do an interview with the BBC the day of his arrest. (See youtube video in margin)

All three believers are in good health and spirits and praising God for their release, according to our co-laborers at China Aid Association. The detainees said during their confinement they had opportunities to witness to guards and even high-ranking government officials staying at the hotels where they were held.

Christians in free nations often wonder if we can really make a practical difference for Christians in persecuted countries. Pastor Bike’s release shows that WE CAN!
Posted by Bart Coffey at 12:46 PM