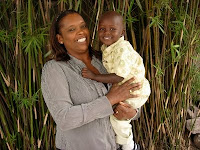 I have to share this incredible story I received from missionary friends, Wayne & Sylvia Turner, in Kinshasa, Congo...

Staying with us are our dear friend, Esther Ntoto and a little 3 year old boy named Flory. Flory's mother was horribly raped and as a result became pregnant, as well as handicapped. As a result of the attack, she arrived at the hospital in need of surgery on her legs. Flory was born at the hospital and lived there with his mother for two years. She passed away one year ago.

An American couple, who have adopted another Congolese baby three years ago, are now adopting Flory.

Esther has brought Flory to Kinshasa to get his passport. He then can get a U.S. visa in order to leave with his new father on Monday.

Esther has had Flory with her at various Congolese government offices, the U.S. Consulate, as well as the hospital for a physical and vaccinations, where he is often singing a chorus at the top of his voice, "Hallelujah, Amen, Hallelujah, Amen!...."

As we've watched Flory, we see so many comparisons to those who become children of God...
- Flory joining a new family where he will be nurtured, taught, disciplined and provided for every single day.
- His new parents sought him out. They have chosen him. Flory did not initiate this adoption. In fact, there is nothing he can do to facilitate it.
- His new parents are not making this a temporary commitment, they are committing themselves to him for the rest of his life.

This story reminds me of my loving heavenly Father, who loved me before I was born, sought me out and provided the way to enter into His family through Jesus.