Not in the spotlight 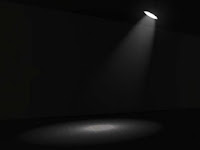 "Now more than ever the word about Jesus spread; many crowds would gather to hear him and to be cured...
But he would withdraw to deserted places and pray." (Luke 5:15-16 NRSV)

I am intrigued by how Jesus intentionally stepped out of the spotlight. He never grasped for status, PR or prestige. He always moved and ministered on the outskirts.

Jesus was a celebrity and could have been in the headlines...
But he stayed on the sidelines by choice.

This speaks into our culture of popularity and fame...
And how I must act and interact differently as a follower of Jesus.
Posted by Bart Coffey at 9:21 AM