Will the World End on Saturday?

Today I read what Jim Daly, the president of Focus on the Family, wrote about the prediction of "Judgment Day on May 21st" by Harold Camping.

I share this with you because I couldn't agree more... 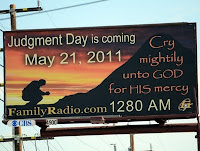 "By now you’ve picked up on the buzz that, according to Harold Camping of Family Radio, the rapture will occur this coming Saturday, May 21st. He's even gone so far as to predict the exact time (6 PM), though there's some confusion concerning time zones around the world.

This isn't the first time that Mr. Camping predicted the Second Coming. He had previously proclaimed Jesus would return in September of 1994. In fact, he wrote an entire book on the topic, but concluded within the book that he could very well be wrong.

If all of this makes you a bit uncomfortable, it's probably because you're familiar with Jesus' own words and warning. Speaking to the matter of predicting His return, Jesus himself replied: "But about that day or hour no one knows, not even the angels in heaven, nor the Son, but only the Father” (Mark 13:32).

According to some published estimates, followers and supporters of the May 21st prediction have spent over $4 million on billboard and bus advertisements to warn people. One retired gentleman, convinced to be sure, has reportedly spent his entire life savings ($110,000) to help fund the campaign. After all, what true believer needs money on May 22nd?

Not surprisingly, media channels are having a field day with this story, not to mention late-night comedians and aspiring ones on both Facebook and Twitter. On the upside, the story has given theologians and pastors an opportunity to share publicly that, indeed, Christians believe Jesus will one day return to judge the living and the dead. On the downside, the spectacle probably doesn't do much to present the agnostic or atheist with a thoughtful representation of Christianity.

Could the May 21st prediction be right? Well, a stopped clock is right twice a day. Still, Jesus tells us...“Therefore stay awake, for you do not know the day your Lord is coming … the Son of Man is coming at an hour you do not expect" (Matthew 24:42,44).

As for me, I embrace the words of Jesus, not the calculations of Harold Camping or other end times forecasters.

Sadly, this campaign has appeared to become an obsession to a number of misguided Christians, who could have been investing their time and finite resources in the lives of people and their immediate needs. To me, that's a shame."